A hairline that measures its mid-point between 5 cm and 6 cm above a line drawn across the brows is what most classify as a typical and desirable female hairline. A mature male hairline usually is 6-8 cm above the brows.

The surgery involves excising a strip of forehead skin right in front of the current high hairline. This results in an incision that is slightly behind the hairline. The hair eventually grows back within the scar, and it, therefore, helps minimize the appearance of the scar. Scar healing varies from patient to patient. In a few patients scars can look virtually imperceptible within a few weeks, on average it might take somewhere around 3-6 months for the scar to get to this point in most people.

Good candidates for hairline lowering surgery or forehead reduction include women with a large forehead or a high hairline or who otherwise have thick hair. Men with a significantly high hairline or disproportionate forehead can also be good candidates for this surgery given they have a thick hairline and no genetical history of hair loss. Men who have had a new hairline created with hair grafting and want their new hairlines to be at a lower level are also good candidates. Individuals with thin hair can have great results especially if the forehead reduction is used in combination with a little amount of hair grafting. This surgery can also help elevate brows in patients that have low or heavy brows, to a more natural and attractive position, but the hairline lowering surgery by itself does NOT affect the position of your eyebrows.

Hairline lowering surgery can at times be combined with hair grafting. It is done especially in men to lower the hairline. In women, the one stage forehead reduction is usually performed alone and does not usually need any hair grafting unlike in men, but hair grafting in them can be used at the same time to shape the hairline and also to give it a rounder look.

Women who have always had a high hairline is most suitable for a hairline lowering surgery. As a woman ages, this is accentuated giving her a balding or masculine appearance. This can be corrected by reducing the forehead size and lowering the hairline.

This surgery can be performed at the same time as a Forehead Lift, or alone. In some rare instances, there is insufficient elasticity in the scalp to present adequate hairline lowering. In such cases, a tissue expander can be planted under the hair-bearing part of the scalp. This is usually needed only when more than 2 inches of hairline lowering is needed. The expander is slowly filled over time. This will stretch the scalp, which is then advanced by lowering the hairline. After several weeks of the procedure, the tissue expander is then removed, and the hairline is lowered into its desired position by a hidden incision on the hairline.

First, patients experience numbness in the front of the scalp. The sensation almost always returns after a 3-12-month period of transient loss. At times, there is an itching sensation during the recovery period. These set of symptoms can also occur after dense graft packing or if an incision is made in the scalp such as in facelifts and forehead /brow lifts. Second, there can be shedding of some fine hair in the front of the scalp within 2-4 weeks after surgery. This is called an “effluvium”. It happens in a few cases. Post effluvium the hair usually comes back after 3 months. Use of 5% Minoxidil is advised onto the front of the hair-bearing scalp after surgery. This medication can decrease the possible fallout and promote a more rapid growth of hair that might have been shed and that of those which will be growing through the incision. Similar to routine hair transplants, the grafted hair almost always fall out and go through a three month “resting phase” before appearing again. Just like with hair transplants, small, temporary pimples can develop along the suture line as the hairs grow out, which is not abnormal. 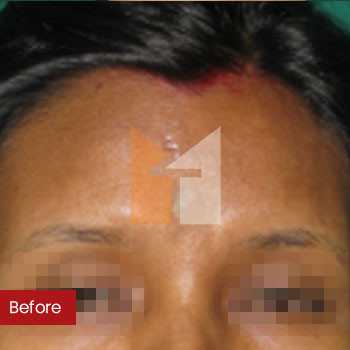 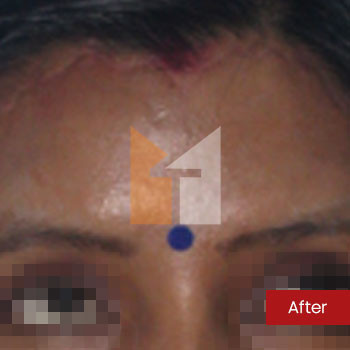 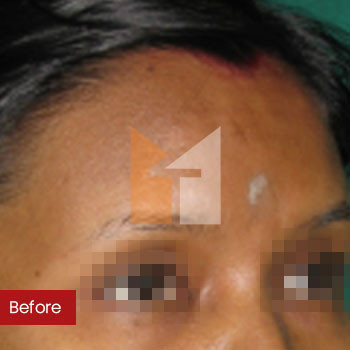 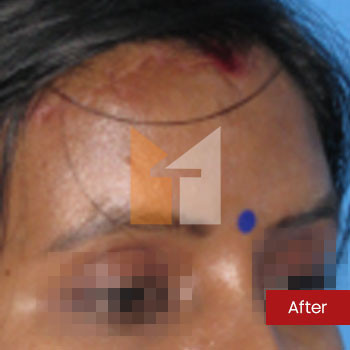 We like to assist our clients with a knowledgeable and in-depth collective approach to answer for all your queries and fears with our FAQ mega-base.

How much does forehead reduction cost?

The cost of forehead reduction depends on whether done as daycare or hospital-based. This procedure is usually combined with Blepharoplasty and a Brow lift and hence, not charged separately. Please call 022 67337500 for detailed information and cost of the procedure.

What happens during a forehead reduction surgery?

Forehead reduction surgery is indicated in people (usually women) who have a very wide forehead and also have drooping of their eyebrows. This procedure reduces the balding pattern and gives the illusion of a shorter face. A pre-assessed and marked strip of skin and tissue just in front of the hairline is removed in such a way that it maintains the natural hairline on the forehead. The hair-bearing area on top of the head is undermined so as to bring it forward and the eyebrows are lifted at the same time. Suturing is done in such a way that normal unevenness of hairline is maintained.

What is the recovery like after a forehead reduction?

The recovery after a forehead reduction surgery is quick. The scar is initially visible but, once the transected hair grows through the scar it is not prominent. Sutures are usually removed in 2 weeks, and sun protection is usually required for 4 months.

What are the risks of getting forehead reduction surgery?

The greatest risk of forehead reduction surgery is the insensitivity noticed on top of the head which is a nuisance when combing hair. This is usually caused due to transaction or edema around the nerves of sensation on the forehead.

Is forehead reduction right for me?

The decision of forehead reduction is right or not depends on a clinical examination, and your requirement. If you are concerned about a broad forehead and droopy brows then this is the best choice. Hair transplant can also be done for a wide forehead, but this cannot address a drooping eyebrow.