As the skin goes through ageing, it becomes loose and starts sagging near the corner and above the edges of the eyelids. Fat deposits can also begin to be more visible due to which the area beneath the eyes may appear puffy.

An eyelid lift or blepharoplasty in Mumbai is a procedure done to remove skin around the eye, correct eyelid defects, add or remove fat deposits, correct deformities or aesthetically modify the region near the eyes. During this procedure, excess skin, muscle and fat that accumulate around the eyes due to ageing are removed.

Why is it Done?

What are the different types of Blepharoplasties?

What Can You Expect from a Blepharoplasty Consultation?

A comprehensive eye examination is important for doctors to gain information about a patient’s visual acuity, tear film stability, eyelid closure strength, palpebral fissures symmetry and previous eyelid surgeries. For those thinking of undergoing blepharoplasty surgery in Mumbai, a visual field test is mandatory. Preoperative photos are also taken before functional as well as cosmetic blepharoplasty.

Patients who have decided to undergo blepharoplasty need to discuss with their surgeon why they want to undergo the procedure. Blepharoplasty can get rid of bulges due to fat herniation and excess skin that can quickly become redundant. Skin discolouration, deep creases and cheek fullness cannot be rectified by eyelid surgery. Patients also need to be aware that some skin has to be left behind so that the eyelid can close properly.

The majority of patients have droopy eyebrows which need to be corrected while considering upper eyelid surgery in Mumbai. Patients also need to be aware that ‘heavy brows can contribute to redundant tissues near the eyelid area. The excess fat and tissue are removed or repositioned during blepharoplasty.

During blepharoplasty, excessive skin and fat is cut off and the lax muscle is tightened. The procedure can be done on the upper as well as lower lids at one time. The procedures are generally done under local anaesthesia even though general anaesthesia can be given if the patient feels uncomfortable or another procedure is planned at the same sitting.

For upper eyelid surgery in India, markings are made above the eye to indicate the amount of skin that needs to be removed. The skin is then cut along these markings with a blade or radiofrequency monopolar cautery. An incision is made in the upper eyelid in such a way that the scar is not visible. Fat might also be excised and/ or repositioned during the procedure. The skin incision is then closed with sutures.

When blepharoplasty surgery in Mumbai is done through the skin, the incision is made very close to the lower eyelashes. The extra fat is removed and the remaining fat is adjusted to re-contour the area. The excess skin is also removed. In some cases, tightening of the orbicularis oculi muscle and the orbital septum might also be done during the procedure.

What is the recovery period of Blepharoplasty?

After the procedure, gauze pads with cold saline solution will be applied to alleviate discomfort and inflammation. You might experience some pain but don’t worry your surgeon will prescribe pain medication. A compressive occlusion of both eyes may also be prescribed for the initial 24 hours after surgery.

The most common symptoms after eyelid surgery in India are excessive tearing, increased sensitivity to light and changes in visual acuity that eventually subsides after a few days. Patients can resume normal activities within 2-3 days but for two months following the operation, you should protect your face by using sunglasses and a high-SPF screen. Moreover, it is recommended not to wear any make-up for at least 10 days after surgery.

How long do the effects of Blepharoplasty Last?

The outcome of the surgery can be influenced by various factors but the effects may not be permanent as the skin around the eyes will continue to age over time. The effectiveness of blepharoplasty in Mumbai will depend on the skin elasticity of the patient. That is why results are generally longer-lasting in younger patients. In the majority of cases, the effects of eyelid surgery in India last for five to ten years.

If there is sagging of the eyelids after the procedure, it will be more helpful to undergo other procedures such as forehead lifts instead of opting for another eye lift procedure. It is important to keep in mind that eyelid surgery will not produce drastic results. It will make the patient’s eyes appear alert, youthful and refreshed. For transformational changes in appearance, it is recommended to pair blepharoplasty with other procedures.

What is the cost of Blepharoplasty in India?

Undergoing eyelid surgery is a huge decision and obviously, you must be anxious to know about the cost of blepharoplasty. Blepharoplasty cost in Mumbai depends on the amount of correction required, the surgeon’s expertise, the clinic’s reputation and its location. During the consultation process, the surgeon informs the patient about the charges for the procedure after a proper assessment.

What are the side effects of Blepharoplasty?

Even though it is popular, blepharoplasty is a mildly risky procedure. That is why it needs to be performed by only the top eye plastic and cosmetic surgeons in India. After the surgery, patients might experience mild pain, scarring, numbness, swelling and discomfort around the eyes. Sensitivity is another common complaint among patients. Moreover, complications like bleeding and infection may also occur but they can be easily treated with antibiotics and by following proper hygiene.

If too much skin is removed from the lower eyelid during blepharoplasty surgery in Mumbai, the eye can look bigger showing the lower lid lining. It will settle down with time but the scleral show may be permanent. Moreover, the outside corner can become more rounded especially if the scars are near the eyes. Surgery to the eyelids should not interfere with the eyeball and thus obstruct vision. Many patients have reported that they got relief from eyestrain or heaviness in the eyelids. Rarely, patients have reported blurred vision after surgery but it will settle down with time.

For any insurance company to cover eyelid surgery in India, a patient’s eyelids need to significantly obstruct the field of vision resulting in difficulty to perform daily activities like reading, writing, driving, sewing etc. Photographs also need to be submitted to prove the narrowing of the eye-opening with a diminished distance from the upper eyelid to the light reflex.

Visual fields may also be needed to document the reduction of the superior field. Visual fields are performed with the eyelids elevated in a resting position to demonstrate the improvement expected after surgery. The amount of restriction present and improvement seen after eyelid taping and elevation varies from person to person.

The entire process of getting insurance for blepharoplasty surgery in Mumbai can take 3-4 weeks or longer to complete. Lower eyelid surgery is rarely covered by insurance or medicare as it is considered a cosmetic procedure.

What is the right age to get Blepharoplasty done?

Blepharoplasty for the upper and lower eyelids is generally done after the age of 40 as that is the age when you start seeing changes as the eye skin begins to lose elasticity and start drooping. Younger patients can also undergo this procedure if they notice eye bags or signs of ageing earlier. Those who are not happy with the natural shape of their eyelids or eyelid creases can also opt for this procedure. 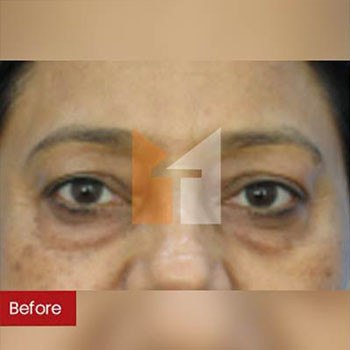 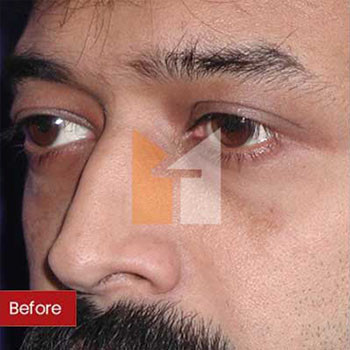 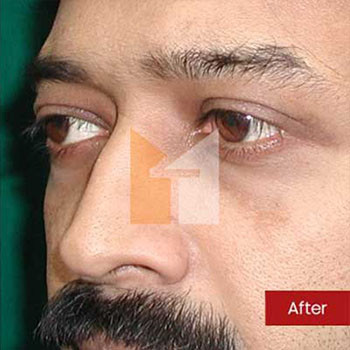 How do I know if Blepharoplasty is right for me?

Blepharoplasty surgery is for those who have loose skin or fat bulges in the eyelid. Some patients complain that their eyelids feel heavy at the end of the day. By reducing the amount of redundant skin, you can alleviate that heavy feeling and will feel more rested and youthful.

Is the procedure painful?

Blepharoplasty is done under anaesthesia. Depending on your case, IV sedation or local anaesthesia may be used so you should feel minimal discomfort during the entire procedure.

How long is the recovery period of Blepharoplasty?

During the healing period, you can expect some swelling, bruising or discomfort which can be controlled with oral medications, cold compresses and eye ointments. In rare instances, irritation at the incision site can also occur after eyelid surgery in India.

How is the eyelid surgery done?

Can other prdocedures be combined with eyelid surgery?

Many other cosmetic procedures and surgeries including face and body contouring surgeries can be safely performed at the same time as blepharoplasty.

Do i need to stop taking my medications before surgery?

If you are taking any anticoagulants like Aspirin, Coumadin, Ibuprofen, Vit. C and E and others, you need to stop taking them only after consultation with your primary health physician.

Will the surgery change my appearance?

Will smoking affect recovery after Blepharoplasty?

Smoking can significantly affect health and recovery after plastic surgery. Treated areas are at a higher risk of poor healing, scarring and infections. Blood vessels that supply oxygen and essential nutrients to the tissues shrink which prevents healing. Patients are usually advised to stop smoking 2 weeks before surgery to reduce the chances of complications.

We offer Continuity of Care! Guide yourself with our latest health care videos. Watch our experts in action from the OT to the newsroom and discover the tiniest of details about various cosmetic procedures. 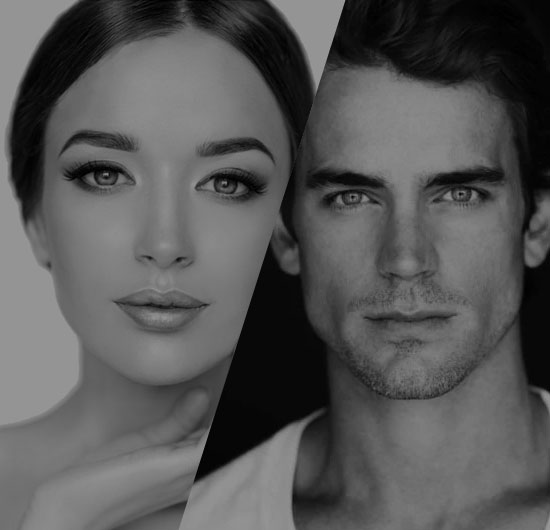 What Our Patients Are Saying

Just a short note to tell how much I appreciate the beautiful job you have done with my eyes, I couldn't have asked for a better surgeon and I Know you have a very bright and rewarding future to look forward to. Before saying that you are an extraordinary doctor, I want to tell you that you are an extraordinary human being. I was an ordinary patient of ordinary means, but your team took care of me as I was your own, thank you for showing so much care and concern. Your skills go beyond. It's the personal concern that comes from within, always keep that with you, that's your gift. It was wonderful meeting such a fine doctor and gentleman. The world does give back some tremendous people. I can't thank you enough but I'm really grateful to have a doctor like you. Thank you so much.

I had given up all hope of having a nose which was normal. Some 28 years back I was in a vehicle accident which lead to a broken nose & perforated septum. In 2016 I underwent surgery twice to rectify the problem. The first surgery was a failure leading to another surgery within 6 months which further exacerbated the problem. I wasn’t actually able to look in the mirror for 2 years and had slipped into depression. Sometime during mid-2018 I read about Dr. Mohan Thomas and the work he had accomplished in his field. Dr. Thomas operated on me in Sept 2018 and today I have a nose. My first reaction on seeing my nose post-surgery was that it looks better than my original nose. I was reborn. My heartfelt thanks to Dr, Thomas, Dr. James and the team at CSI. Thanks